Set sail for the Norwegian fjords and explore incredible UNESCO World Heritage Sites bordered by snowy peaks and impressive cliffs with pure waterfalls. Visit unique glaciers and villages tucked away in the hollows of these undulating landscapes.

All about cruises Norwegian Fjords

Superb glaciers, towering mountains and traditional towns offer fabulous panoramas and unusual places to visit during a Norwegian fjord cruise. You still need to select excursions to show you the very best of the region. Here's our shortlist of unmissable destinations.

Before you set off on a cruise through the Norwegian fjords — great places to see rich fauna and stunning natural scenery — here is some useful and unusual information. The trip will soon be an even more attractive prospect! 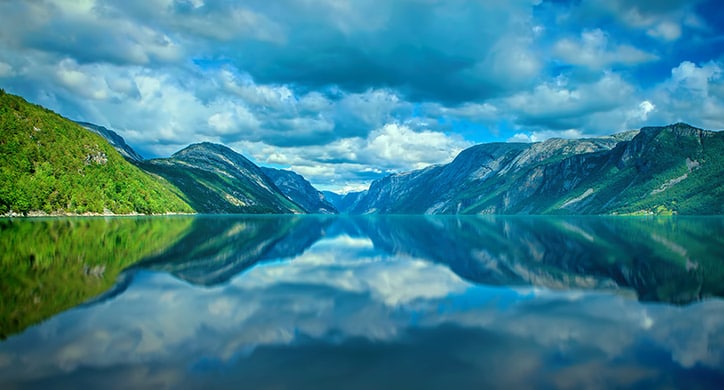 Fjords: should you head north or south?

Superb glaciers, towering mountains and traditional towns offer fabulous panoramas and unusual places to visit during a Norwegian fjord cruise. You still need to select excursions to show you the very best of the region. Here's our shortlist of unmissable destinations. 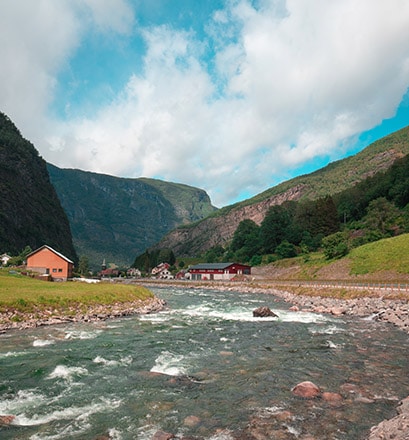 The Flamselvi River flows at various speeds through the middle of a green valley and between houses with coloured roofs dotted along the riverbanks. Waterfalls hurtle down steep slopes. From the tourist train which links Flam and Myrdal and climbs to over 860 metres, the views are amazing: each as extraordinary as the last. Using a second train, you can reach the charming town of Voss, passing by spectacular scenery including precipices and high waterfalls. Unforgettable photos are a given.

A UNESCO World Heritage Site since 2005, the Geiranger Fjord is one of the most famous in Norway. Walking around this fjord, enjoy being in total harmony with the impressive and yet comfortingly calm natural surroundings. Some of the falls that end their frenetic journeys in the Geiranger Fjord are also some of the best-known in the region, like the Seven Sisters, the Suitor and the Bridal Veil.

Kayak in the Naeroyfjord

The Naeroyfjord is a Norwegian fjord that is also a UNESCO World Heritage Site. Enjoying its beauty from a kayak on the water remains a special experience. The impressive surrounding mountains, and the waterfalls and rivers that throw themselves into the fjord create breathtaking panoramas and contribute to its splendour. 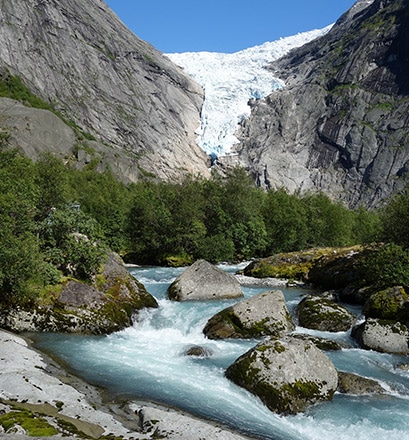 Hike near the Briksdal Glacier

A Norwegian cruise gives you the chance to explore natural wonders that are totally unique. Part of the Jostedal, Europe's biggest glacier, the Briksdal Glacier only adds to the enchanting Norwegian fjord scenery. Rising up 1,200 metres, the jagged white and blue ice moves down the valley. A 3 km walk gives you the opportunity to admire its full beauty and extent. 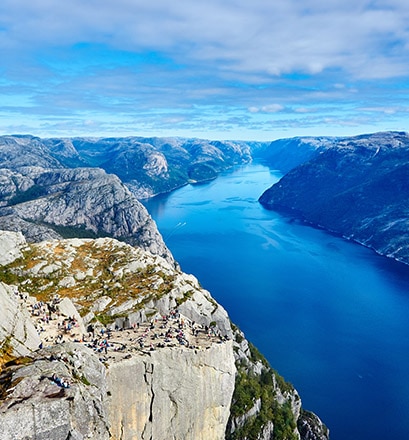 Lysefjorden is famous among all adventurers. The toughest climb the 4,444 wooden Flørli stairs. Risk takers have photos taken on Kjerag, which is famous for its rock stuck between two rocky walls. Others prefer to get close to the edge of the 600-metre Preikestolen cliff. However, Lysefjorden is just as impressive from its crystalline waters. Cliffs, waterfalls and green mountains captivate visitors. 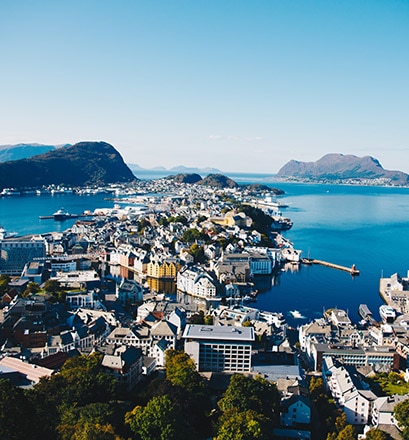 The town is by the water and seems to melt into the hills on the horizon. Alesund on Norway's west coast is an attractive place with paved alleys, canals and Art Nouveau buildings. The decoration and paint on the facades make the town special, after it was devastated by a fire in 1904 and rebuilt to meet "Jugendstil" regulations: a unique architectural style. 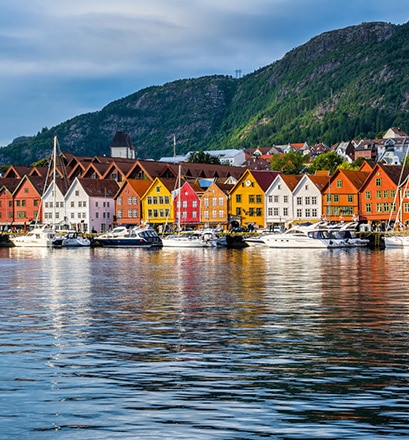 Visit the Bryggen area of Bergen

Although Bergen is the second biggest city in Norway, in our imaginations it retains the feel of a northern medieval village. Images of Bryggen's coloured wooden houses by the port stay in the memory. This district, which has been a UNESCO World Heritage Site since 1979, has made an impact on the country's history and even more so on that of the North Sea. From the 14th century, the port joined the Hanseatic League set up by the Germans with regional trading posts up to the Baltic Sea. At that time, the Bryggen area was exclusively for German merchants. It would be a shame to miss out on this charming district before leaving for the fjords.

Before you set off on a cruise through the Norwegian fjords — great places to see rich fauna and stunning natural scenery — here is some useful and unusual information. The trip will soon be an even more attractive prospect!

Dos. Although the Norwegians shake hands to greet each other, they are quick to use informal language.

Don'ts. Civic-mindedness is a cornerstone of life in Norwegian society. Special favours are banned, you sincerely thank anyone you speak to (whether they are a friend or a stranger), you don't queue-jump and there are street patrols to prevent conflict.

What if getting rid of all time constraints were the real luxury? The municipal council on Sommarøy Island in the very north of Norway near Trosmo has asked the government to ban time in the summer! This initiative isn't as crazy as it sounds when you realise that the sun doesn't set here for 69 days during midsummer. According to some locals, watches and timetables have actually been got rid of already, meaning it's not uncommon to see children playing and people swimming or mowing the lawn during what's supposed to be night-time.

The element of Norwegian cuisine that we are most familiar with is smoked salmon. Although the fish is often prominent on people's plates here, lamb is also well-loved. The animals are reared locally in the fresh air and provide high-quality meat, especially for pinnekjøtt: a rack of lamb or mutton salted in brine or seawater and served at Christmas. Brunost, a brown cheese with a caramel flavour, is also widely eaten.

Trolls are found again and again in Norse mythology and first appeared in the Middle Ages. These myths were a key part of the Viking religion until Scandinavia's Christianisation. Trolls were most often associated with hostile natural environments foreign to people like oceans, mountains and forests. They therefore symbolised natural forces and the difficulties of living in society, and were fear-inspiring. For example, they were blamed for kidnapping women and children.

To remove the need for local ferries to come and go between eight of the fjords and to open up a fast road on its west coast, Norway is looking into a huge and innovative floating tunnel and bridge project. This would suit certain large fjords where features like conventional tunnels and suspension bridges can't be built.

Books. Through portraits of four generations of women, A Hundred Years is an example of autobiographical fiction which combines and untangles stories, tragedies and family taboos. Herbjørg Wassmo also depicts the hard lives and combative natures of these mothers with so many more and less wanted children in Nordland: the northernmost region in Norway.

Music. Native to northern Norway and Scandinavia, the Sámi people have long been repressed by successive governments. Their language and culture were only recognised in 1988. For a few years, joik traditional Sámi music has been seeing a renaissance and becoming popular. Young Sámi singers like Marja Mortensson and Elle Márjá Eira pair these emotional and nostalgic songs with contemporary and electronic music.

Film. Directed by Arne Skouen in 1957, Nine Lives is inspired by real events during World War Two. Jan Baalsrud is the only survivor on his ship after a German military attack off the Norwegian coast. Hunted by the Nazis, he tries to reach Sweden: a neutral country in the conflict. Throughout the story, magnificent landscapes are shown: snowy mountains, white plains, fjords and icy cliffs.

Sognefjord is one of the biggest fjords in Norway, covering 204 kilometres. This makes it the longest in Europe and the second longest in the world after Scoresby Sund in Greenland. With an average width of 4.5 kilometres, it is also the widest fjord in Norway. Its depth varies between 100 and 1,308 metres.