With famous diving spots and UNESCO world heritage sites, the Gulf of California reveals all the beauty and richness of its crystal-clear waters in the Baja California peninsula. An opportunity to explore landscapes where the red stone contrasts with stunning blues, where the whales play among schools of dazzling fish. Welcome to this region, which Jacques Cousteau called ”the aquarium of the world.”

All about cruises Sea of Cortez

From diving to exploring UNESCO natural sites, from busy towns to seaside resorts, a cruise in the Gulf of California will suit ocean lovers and nature lovers alike, as well as both adventurers and travellers looking for a relaxing time. 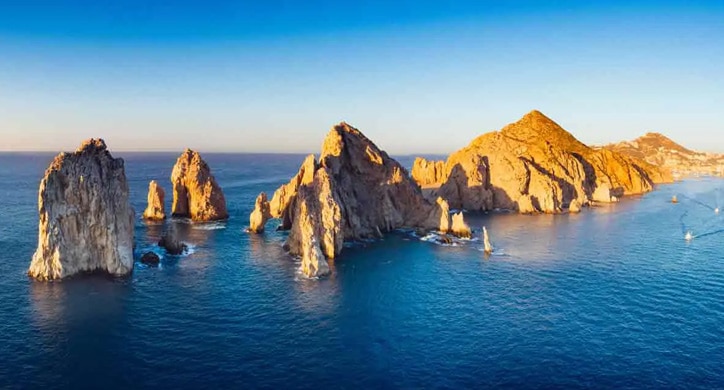 The Essentials - Sea of Cortez

What are the peculiarities of the Baja California region? What are the specialities and the sights? Read our practical guide before going on your trip to the Sea of Cortez. 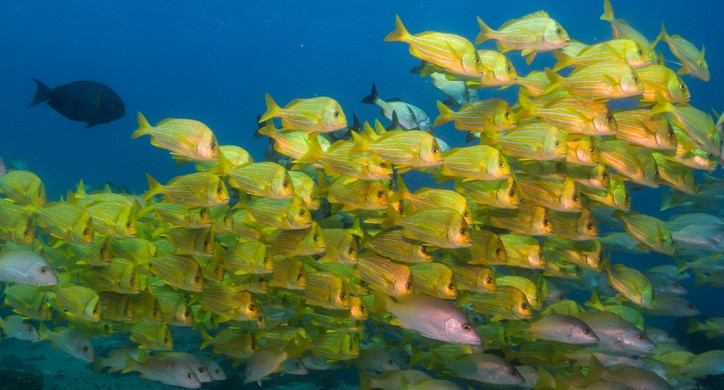 From diving to exploring UNESCO natural sites, from busy towns to seaside resorts, a cruise in the Gulf of California will suit ocean lovers and nature lovers alike, as well as both adventurers and travellers looking for a relaxing time.

Dive into a natural aquarium — Gulf of California, Mexico

“The largest aquarium in the world”, according to Jacques Cousteau, has exceptional fauna. The best way to see it is by scuba diving (for experienced divers) in numerous places, which are full of surprises and have names that will make you dream: Isla Monserrate, Isla Coronado, Punta Colorada and Bahia Amortajada on the Isla San José, Isla Espíritu Santo, Isla Cerralvo... 39% of marine mammal species known on the planet, 900 species of fish and 33 cetaceans can be found here. Common bottlenose dolphins, grey and blue whales, hammerhead sharks, whale sharks, seals and turtles have been recorded in the region. 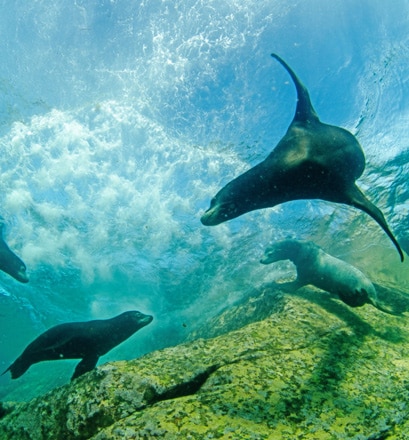 Steep cliff faces, jagged rocks and imposing boulders form Los Islotes, located in the southeast of Baja California. And it is here where a large colony of California sea lions can be found. Rarely fierce and quite playful, they are easily approached. It is even possible to swim next to them, which is a moving experience. Under the water, moray eels, grouper fish, clown fish and star fish bring a surprising touch of colour to the rocky depths. 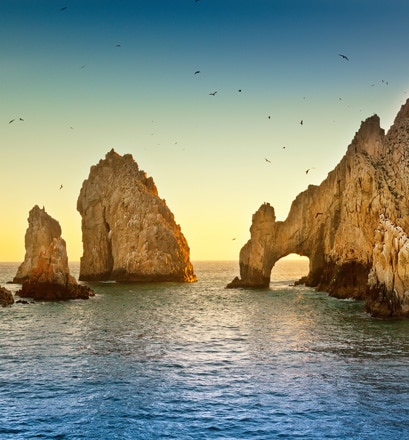 At the far south of the Baja California Peninsula, you can recognise Cabo San Lucas by its rock formations emerging from the water, creating an arc above the waves. Between the Gulf of California and the Pacific Ocean, the Cabo San Lucas Bay is also well-known for its fabulous fine sandy beaches and its busy nightlife. 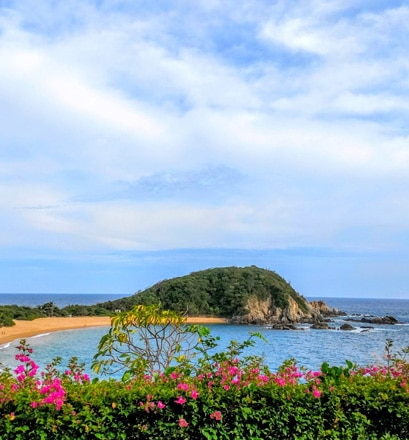 An unmissable destination in southern Mexico, Huatulco Bay has 36 beaches that are each as idyllic as the other, as well as the Parque Nacional Huatulco, guaranteeing the preservation of the precious biodiversity. The best way to discover its splendour is to climb on board a catamaran and sail along the coastline. It is thus easy to admire the Sierra Madre mountains, the lush vegetation and the cliffs at the edge of these magnificent beaches. Birds, dolphins and manta rays will add to the magic of this excursion. A stop on a deserted beach in La India Bay, with an opportunity for swimming and hiking among the palms, will complete your trip into paradise.

At the end of the 19th century, the first Europeans coming all the way to California settled here, in San Diego. The historical centre of the city is full of traditional buildings from this time, colourfully restored, reminding you of this past era. But San Diego is also known for its exciting artistic centre. More extensive than New York’s Central Park, Balboa Park is the largest cultural park in the US. Seventeen museums, a botanical garden and pavilions with international architectural influences are spread across the particularly abundant vegetation. 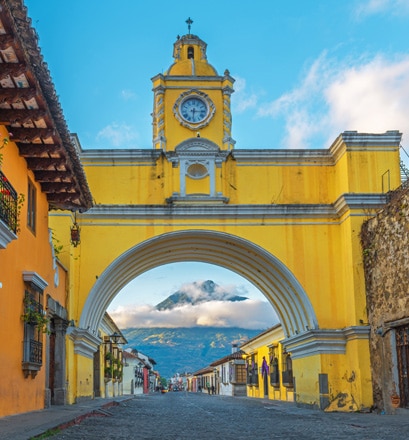 The former capital and the seat of the Spanish colonial government of Guatemala for centuries, Antigua was founded in 1543 by the conquistadors. Despite the earthquakes that it has withstood, the town has UNESCO world heritage status and is one of the best preserved colonial towns in Latin America. This can be seen in its paved streets, the Merced Baroque church, the Plaza Mayor surrounded by historical buildings and the Metropolitana cathedral, built when the Spanish arrived.

The Essentials - Sea of Cortez

What are the peculiarities of the Baja California region? What are the specialities and the sights? Read our practical guide before going on your trip to the Sea of Cortez.

Things to do. The Mexicans are very warm and proud of their country. Don't hesitate to engage them in conversation!
Don'ts. It is seen as inappropriate if you get angry or cause a scene. Whatever the reason for your dissatisfaction, keep calm while explaining what the problem is.

In the village of Santa Rosalia, on the edge of the Gulf of California, the Santa Barbara church can be found. It was designed by Gustave Eiffel in 1884 and presented in the 1889 Exposition Universelle in Paris next to the Eiffel Tower. The architect had a concept in mind: buildings that could be disassembled and reassembled at will. Acquired in 1894 by the French copper mining company El Boleo, the church arrived in Mexico in separate sections. Its reconstruction was completed in 1897.

Baja California cuisine is strongly influenced by seafood produce. On the Pacific side, you will relish the different lobsters, tuna, swordfish and grouper fish, while on the Gulf of California side, squid and prawns are in abundance. Whether grilled, cooked in sauce or served in tacos, the fresh produce is always well seasoned with condiments and spices.

Present in Baja California, the ribbonfish or giant oarfish is considered to be the longest bony fish in the world. It can reach up to 17 metres long! It usually lives in deep water (around 900 metres) and only very rarely comes up to the surface of the water. Understandably coming close to such a creature elicits strong emotions! Popular legends about this “sea serpent” believe it can forecast earthquakes and tsunamis. Several specimens have been found stranded in Taiwan and Japan several days before earthquakes. Some believe that these fish are sensitive to the movement of tectonic plates. This theory has not yet been scientifically proven.

We already know the decorative and therapeutic characteristics of cacti. A Mexican scientist has perhaps found a new use for them. Sandra Pascoe has developed a process using juice extracted from the Barbary fig to create a new material to make non-polluting disposable packaging. This would be an alternative to plastic packaging, which the researcher hopes to be able to bring to market by 2020—the date that a law prohibiting all plastic bags, balloons and single use plastic objects will come into effect in several Mexican states.

Books. French and English versions: In 1940, John Steinbeck decided to go to Baja California for an in-depth journey that would have a lasting effect on him. Begun in a car, this road trip then became a marine adventure on the Gulf of California. On board the Western Flyer, a boat belonging to his friend and biologist Ed Ricketts, the writer undertook painstaking work to catalogue the species present in the region. He thus began an avant-garde reflection of mankind's impact on his environment. He noted his thoughts in his log book, simply called The Log from the Sea of Cortez.

With its arid climate, Baja California is ideal for cactus growth. There are around 100 species in the region, 80 of which are native. Among them is the Mexican giant cardon, the largest cactus in the world. It can reach 19 metres high and its trunk can measure up to a metre in diameter.