This is one of the world's most isolated islands. Despite being in the middle of the Pacific Ocean and far from any continent, Rapa Nui (or Easter Island) was home to one of the most fascinating civilisations in history. Nearly 900 moai — huge iconic statues found on the island — are its most remarkable legacy. In the 21st century, visiting Easter Island remains one of the surprising trips you can take.

All about cruises Easter Island

For keen travellers, exploring this place is the dream. Easter Island piques curiosity and fascinates visitors. Almost 900 moai (giant iconic statues) populate the island whose native name is Rapa Nui. Many of them invite reflection. Pause for a few minutes and understand this faraway culture a little bette. 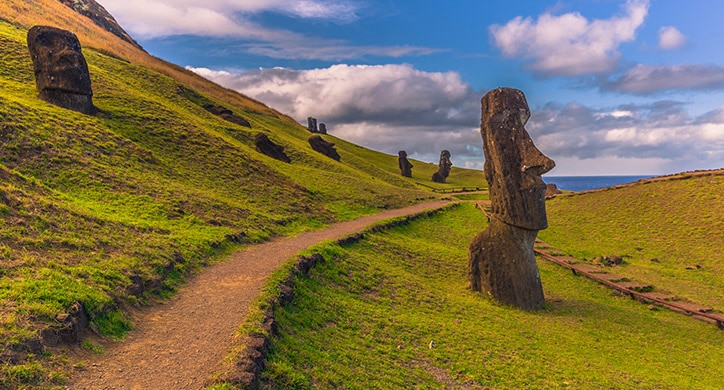 What do we really know about Easter Island? All the mysteries around the moai and the history of a people believed to be extinct attract visitors annually from all over the world. Here are the beginnings of some answers. 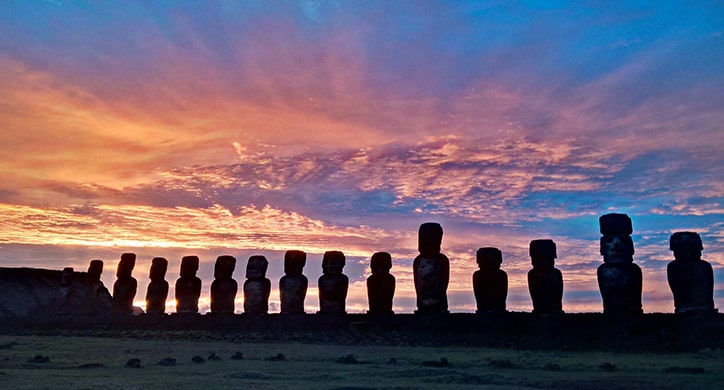 For keen travellers, exploring this place is the dream. Easter Island piques curiosity and fascinates visitors. Almost 900 moai (giant iconic statues) populate the island whose native name is Rapa Nui. Many of them invite reflection. Pause for a few minutes and understand this faraway culture a little bette. 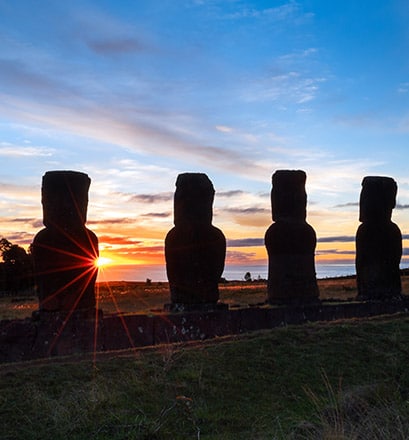 There are seven of them. Seven watchmen monitoring the horizon. The inland Ahu Akivi is the only place on Easter Island where the moai face the ocean. Arranged next to each other, these four-metre statues watch over the island. Each weighs about 12 tonnes. These huge statues represent ancestors or the most important kings. They were supposed to protect locals and make them prosperous. 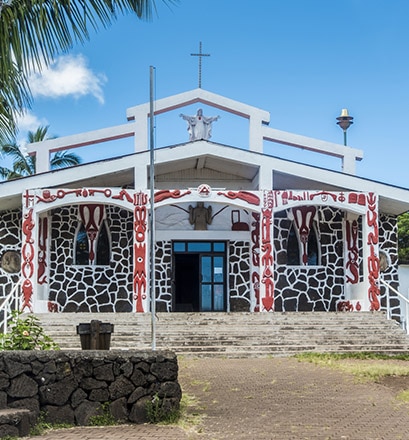 Hanga Roa is the capital of Easter Island. The only urban centre on Rapa Nui, in the south of its western side, this village is where most of the island's population (7,000) lives. A lovely time can be had walking around the little Hanga Roa Otai fishing port or visiting Santa Cruz Church (the only Catholic building on the island). Built in 1937, it is decorated with superb wooden sculptures. Nearby, the artisan market is the place to unearth a typical souvenir made by the island's craftspeople. In the middle of the town, facing the ocean, Vare Vare Park provides some green space in which to relax. 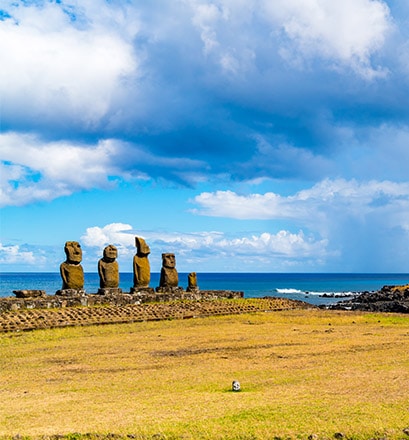 During a stop on Hanga Roa, you absolutely must visit one of Easter Island's most impressive archaeological sites: Ahu Tahai. It contains three ahu: ceremonial platforms made of the island's volcanic rock. Ahu Ko Te Riku is noteworthy with its statue featuring white stone eyes. Ahu Vai Ure stands out for its five moai in a line with their backs to the shore. The solitary Ahu Tahai moai is 4.5 metres tall. This is a place you must visit to learn about history and enjoy exceptional scenery at the same time! 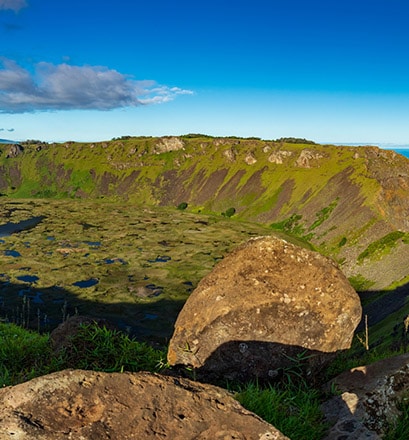 You have to imagine the panorama to understand the feel of this place. On one side there are the slopes of Ranu Kao volcano; on the other, a towering cliff plunging in to the Pacific Ocean. The ceremonial village of Orongo sits between them. Camped out on the southern tip of Easter Island, the 53 little stone houses that make up this hamlet evoke a time when Rapa Nui clan chiefs came together to choose their religious leader. 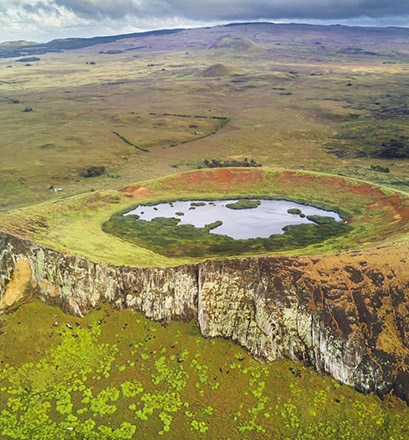 Discover the marvels of the island's eastern region

To admire the island's biggest ceremonial platform, Ahu Tongariki, you have to go east. It has 15 moais standing side by side, including the heaviest on the island which weighs 86 tonnes. Partly destroyed in a 1960 tsunami, in 1990 the ahu was rebuilt exactly as it was. With its 15 giants, this is one of the iconic sites to which travellers often come from half a world away. The dormant Rano Raraku volcano is nearby. This site has incredible and legendary natural scenery. Its crater protected by 200-metre-tall walls contains a natural reservoir and was used as a quarry for moai building. An estimated 95% of moais were sculpted here. 394 in various states of completion can still be seen today.

What do we really know about Easter Island? All the mysteries around the moai and the history of a people believed to be extinct attract visitors annually from all over the world. Here are the beginnings of some answers.

The Sebastian Englert Museum in Hanga Roa is home to one of the 12 female moai found on Easter Island. Discovered in 1956 by Thor Heyerdahl, the torso was exhibited alone in Oslo until the head was found in 1988. The body was then taken back to its native land so the statue could be complete.

Although Rapanui is still spoken a little, Spanish is the most common language on Easter Island.

Hello/Good evening: Buenos días/Buenas noches
Goodbye: Hasta luego
Welcome: Bienvenido
Thank you: Gracias
Yes/No: Sí/No
How are you?: Cómo estás?
Very well, thanks, and you?: Bakan, muchas gracias y tú?
My name is...: Yo me llamo

Ceviche and fresh but unchanging fish are the cornerstones of the local cuisine. Most fruit and vegetables are imported. However, the delicious and sweet little pineapples you find on Easter Island are scrumptious.

Some historians say that the first Easter Island inhabitants came from Indonesia. But legend has it that the first man to arrive here was the Polynesian king Hotu Matua. Chased from the Marquesas Islands, he landed on Rapa Nui in the year 500, having first sent his seven sons over as scouts. The boys were then represented by the seven moai facing the ocean at Ahu Akivi.

Since the rongorongo glyph system was discovered in 1864 on Easter Island by the missionary Eugène Eyraud, it has never been deciphered. However, we do know that tablets were read from left to right, starting at the bottom. Some symbols are reminiscent of traditional Polynesian genealogical hymns. A lunar calendar has also been deciphered.

Books. Thor Hyerdahl was a Norwegian explorer famous for crossing the Pacific between Peru and the Tuamotus in 1947 on-board a perilous dinghy. His book Aku-Aku - The Secret of Easter Island is an adventure classic. This autobiographical narrative traces the stages of the first archaeological expedition conducted on the island in 1955. More than a chronicle of a scientific mission, the text tells of the concern the last Pascuans felt about the Europeans and how they wanted to keep their culture secret: a culture that had flourished for centuries without any other influence.

Music. Most Rapa Nui dances are Polynesian in origin, like the sau-sau from Samoa and the ula-ula and tamuré from Tahiti. The first two are characterised by wave-like hip and arm movements, while the third is mainly danced by men who perform spectacular acrobatics reminiscent of war dances.

Film. Too often, it is assumed that the people behind the moai have died out. However, those who believe this don't know Rapa Nui's contemporary history. The documentary L’Histoire cachée de l’île de Pâques (The Hidden Story of Easter Island) ((France Ô and Virginie Adoutte, 2014) shows how the 400 Rapa Nui people were confined behind barbed wire after the arrival of the Chileans in 1888, penning them in the equivalent of 6% of the territory. The rest was allocated to intensive sheep farming and operated by a private company. For some of them, the only way out was to flee on pirogue canoes to try and reach Tahiti over 4,000 kilometres away. Their story is told here for the first time.

Easter Island is the remotest inhabited island on the planet. It is 3,700 kilometres off the coast of Chile.