Visit Machu Picchu or the archaeological site of Chan Chan, tour the historical centres of Valparaiso, Lima or Cuzco, fly over the Nazca Lines…a cruise along the Andean coast, taking in Ecuador, Chile and Peru, is a voyage like no other as you discover the legendary Inca civilisation and the major Pre-Colombian sites.

All about cruises Chile, Ecuador & Peru

Along the Andes Cordillera

Not to be missed - Chile, Peru & Ecuador

As the cradle of the different Pre-Colombian civilisations, including the famous Inca and Nazca cultures, Chile, Peru and Ecuador offer an extraordinary array of activities. Here is our special selection for Latin America. 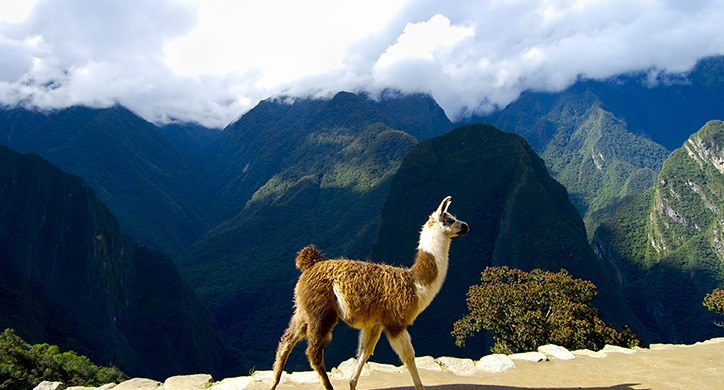 A cruise to Ecuador, Peru and Chile is a chance to journey along the Andean mountain range and explore some major Pre-Colombian sites such as Machu Picchu and the Nazca lines. Here is some useful info to help you prepare for this extraordinary trip. 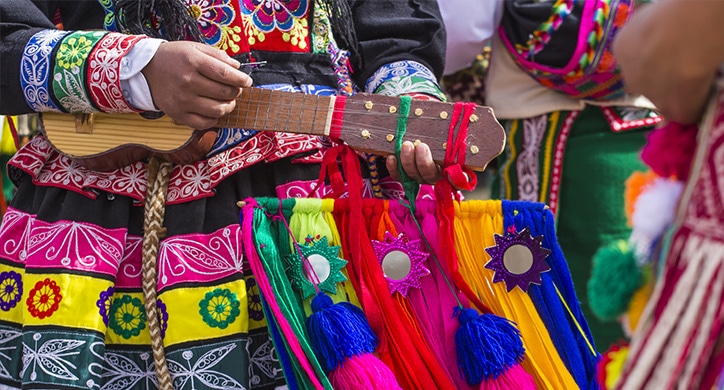 Not to be missed - Chile, Peru & Ecuador

As the cradle of the different Pre-Colombian civilisations, including the famous Inca and Nazca cultures, Chile, Peru and Ecuador offer an extraordinary array of activities. Here is our special selection for Latin America. 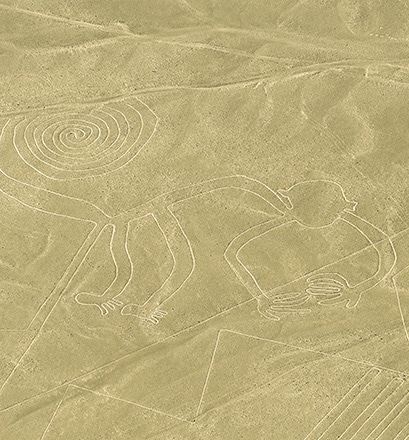 Fly over the Nazca Lines, Peru

The Nazca Lines depict animals such as the hummingbird, monkey, dog or condor, and geometric lines or human forms measuring several hundred metres over an area of 450 km2. They remain shrouded in mystery—just what do they symbolise?
Are they linked to shamanism or a specific religion? Were they part of an astronomical calendar? Whatever their origin, the best way to appreciate their sheer size is from above, flying over them in a small aircraft. 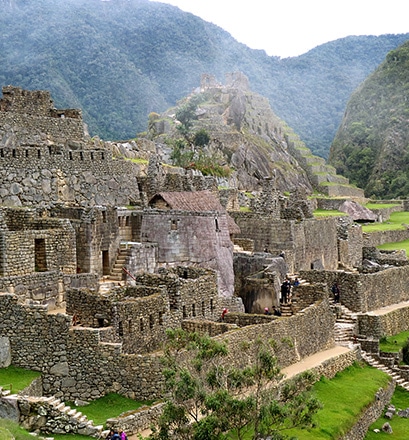 A site that needs no introduction. Machu Picchu is to Peru what the Eiffel Tower is to France! Seated at an altitude of over 2,400 metres, Machu Picchu remains the most iconic Pre-Colombian Inca site. Wander from terrace to terrace among the ruins of this citadel and its unique architecture and admire how harmoniously it fits into its environment. Its temples, pyramids, sacred area and fields all blend into the landscape, on the ridges of the peaks of the Huayna Picchu and Machu Picchu mountains. 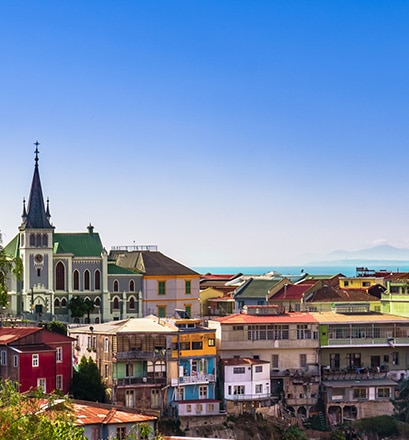 Take the time to visit Valparaiso for a taste of a city where nature and archaeology abound. With almost 300,000 inhabitants, Chile's second largest city has retained an appealing bohemian vibe. The coloured houses that cling to the cerros hillsides and the arty feel add to the charm. Withs its wall paintings and narrow streets full of flowers, “Valpo” is best explored on foot. As you amble through the city streets, you will come across some delightful boutiques and art galleries. And if you're put off by the many steps, take the cable car! 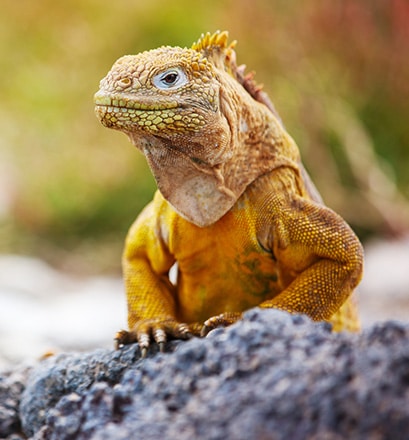 Discover the wildlife of the Galápagos Islands, Ecuador

This unspoilt natural site lies more than 1,000 km of the coast of Ecuador. The Galápagos archipelago is made up of 127 islands and islets and harbours a rich biodiversity. Its giant turtles and land and sea iguanas are what draw visitors but the Galapágos Islands are also home to 58 bird species, 28 of which are endemic, and 300 species of fish. The remarkable wildlife also includes Galapágos sharks and sea lions, fur seals and humpbacked whales. 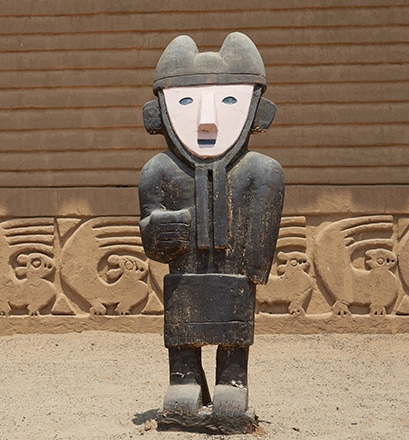 They were known as the Chimú. The people of this Pre-Colombian civilization were particularly sophisticated and left behind one of the most remarkable archaeological sites in South America at Chan Chan. The city was built between 850 and 1470 AD. Its architecture is unique: adobe walls with figurative or geometric embellishments and districts set out according to strict social ideals: kings, aristocrats, nobles, the middle classes and the lower classes. Each quarter contains either palaces, more modest homes, or other buildings. 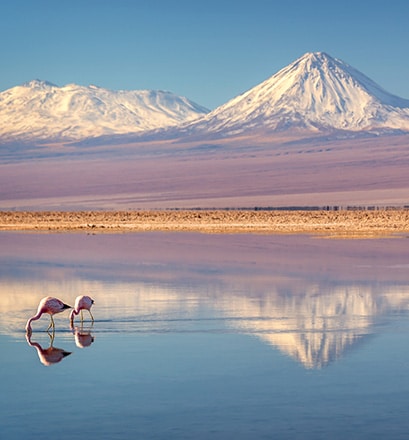 Take a trip to one of the most arid regions of the world: the Atacama Desert in Chile. With its astounding volcanoes, lakes and lagoons where Chile's flamingos come to drink, its geysers, lunar landscapes and salt deposits, the scenery offers some spectacular contrasts, ranging from snow-topped peaks, arid expanses of cracked earth to some surprising stretches of water. Simply breathtaking!

A cruise to Ecuador, Peru and Chile is a chance to journey along the Andean mountain range and explore some major Pre-Colombian sites such as Machu Picchu and the Nazca lines. Here is some useful info to help you prepare for this extraordinary trip.

Dos. Take the chance to start a conversation with the people you meet. The people who live in the towns you visit will always be interested in learning more about you. This is not a sign of misplaced curiosity, but a mark of courtesy. Don'ts. Don't get cross if the person you are meeting is 30 minutes late: Chileans have their own notion of time and are not known for their punctuality!

The Nazca Lines were traced over a thousand years ago in the desert region between the cities of Nazca and Palpa in Peru, and have yet to reveal all their secrets. The lines depict animal, human and geometric forms and measure tens of metres long, so are only visible from the sky. According to some archaeologists, they were designed to communicate with aliens, although this theory has been contested. Others believe that the figures are part of an astronomical calendar or are related to a water cult.

*Chile's language has a few particularities so we have chosen to provide you with a Spanish phrase guide, which can be used in all three countries

In Ecuador, Chile and Peru, be sure to try the delicious traditional dish of ceviche. It is made with fish (tuna, cod or salmon) or prawns marinated in lime and other citrus juices. It is often served with red onions, coriander, chilli and, depending on the region, peppers, tomatoes or sweet potatoes.

Contrary to what its name suggests, the Panama hat comes from Ecuador. The famous headpiece actually owes its name to the material it is made from: fibres from young palm shoots. Panamas are traditionally woven by hand and it can take up to ten months to make one hat. The hat became more widely worn in the early 1900s when workers put them on for protection during the construction of the Panama Canal. The item later became popular in more sophisticated circles, in Paris for example.

Added to the UNESCO World Heritage list as the Archipiélago de Colón, the Galapágos Islands were renamed the Galápagos Biosphere Reserve in June 2019. At the same time, the protected surface area was increased to over 14 million hectares, which makes it one of the largest protected marine areas in the world. With giant turtles, iguanas, sea lions, frigate birds, penguins and native trees, the islands lie 1,000 kilometres off the coast of Ecuador. After a visit in 1835, Charles Darwin was inspired by the fauna and flora of the Galápagos to develop his theory of evolution through natural selection.

Books. Deemed one of the major literary works of the 20th century, The House of the Spirits by Isabel Allende (Westminster, Maryland: Knopf, first English language edition, translated by Magda Bogin, 12 April 1985) is a family saga that relates the trials and tribulations of four generations in Chile, from the Post-Colonial period to the coup d'état in 1973. Women play a major role in the novel which traces social and political upheavals and family events, while incorporating touches of magical realism. As she covers political movements, social conflicts, reflections on personal matters, love and death, Allende paints a very dense picture.

Music. The cumbia originated in Colombia in the 1940s and spread to Peru 20 years later. Combining Caribbean, Native American and Spanish rhythms, it is the most listened to type of music in Peru. It borrows from rock, salsa, merengue and traditional music and is very popular for dancing.

Film. "No" (Pablo Larraín, 2012). The message is clear in 1988 Chile. Under international pressure, General Pinochet is forced to hold a referendum. For a Yes, he will stay. For a No, he will stand down from power. Power he took by force 13 years earlier. A fierce media battle raged before the plebiscite. A young advertising executive, René Saavedra (Gael García Bernal), is taken on by an agency to help the "No" win. He is more used to promoting consumer goods and is thrust into a world where ideals count. He learns a lot as he does his job, although is subject to doubt and pressure. Meanwhile, the film viewer is forced to question the influence of messages and propaganda.

Stretching 4,300 kilometres from north to south, Chile is the longest country in the world. However, it is only 440 kilometres across at its widest point.